Find me on:
LinkedIn

Many athletes have naturally over or under-developed muscle groups based on their sport-specific training. Quadriceps dominance, in particular, extends to a variety of athletic endeavors, such as the constant vertical jumping in volleyball or the precise cutting in soccer and other field sports. Because these athletes over-develop and preferentially activate their quadriceps during lower body exercises, the posterior leg does not respond to resistance as quickly. Over time, this movement pattern becomes habit, and the glutes and hamstrings fail to “turn on” since the quads will automatically absorb the load. This uneven strength distribution between the anterior and posterior portion of the upper legs leaves the lower body exposed to injury. Let’s discuss the importance of glute activation for any athlete’s strength training. 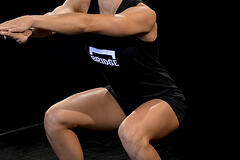 When the lower body experiences resistance, in the form of bodyweight or additional weights, it normally signals the anterior and posterior portions of the legs to undergo something called co-contraction. The front part of the thigh, predominantly the quadriceps muscle, and the back of the thigh, including the hamstring and the gluteus maximus, will contract simultaneously to provide the greatest amount of stability around a joint during movement. Let’s use a basic bodyweight squat as an example. As you bend your legs on the way down in a squat, your hamstrings, gluteus maximus, and quads all eccentrically contract to counteract gravity and prevent you from falling. This means each muscle lengthens with tension, like the tension in a rope if you lowered a heavy object to the ground slowly. At the bottom of the squat, both sides of your leg contract without shortening or lengthening (called isometric contraction). On the way up, your quads concentrically contract (the muscle shortens) to pull your hips back in line, and your hamstrings/gluteus maximus concentrically contract to pull your knees back into a straight line as well. The take away is that both sides of your leg are constantly engaged, working together to provide the greatest support for any given resistance. What happens then, when you take away the stabilizing power of your hamstrings and glutes?

Muscles That Won’t “Turn On”
Many athletes naturally develop very strong quads. Jumping, running, kicking, turning, and diving, among other movements, all reinforce this muscle group. You depend on them to accelerate at the end of a race or generate power throughout a game. You can harness even more power through the posterior chain, including your glutes and hamstrings, but you will have to focus harder to activate them. In strength training, over-reliance on your quads can put excessive stress on your knee and hip joints. Your quads may even fatigue early without the help of your posterior muscles, placing further tension on your knee joint. To avoid this, athletes should focus on developing the muscle memory for hamstring and glute activation. There are several basic exercises you can learn right now to do so.

Glute Activation Exercises
A primary glute exercise would be Monster Walks. Using an elastic band around your ankles, stand with feet shoulder-width apart and step side to side or forward and back, keeping tension on the band the entire time.

The Back Bridge is also great: lying on your back with feet flat and knees bent, squeeze your gluteus maximus first, then lift your pelvis a foot off the ground and lower back down steadily.

Another great starter exercise for glute activation is a simple Front Bridge - Leg Raise.  To perform this movement, start in a pushup position with your hands under your shoulders and your toes on the groud. From there, alternate lifting your feet off the ground and squeeze your glutes before you lift each leg to emphasize the correct movement pattern.

There are numerous more glute and hamstring exercises, and I encourage you to explore my post on muscle imbalances here.

Protective and Powerful
Glute and hamstring strength not only protects the knees and hips as you progress through your strength training, but it also can create unparalleled power in your sport. Focus on this muscle activation early in your training and you will truly maximize your performance.