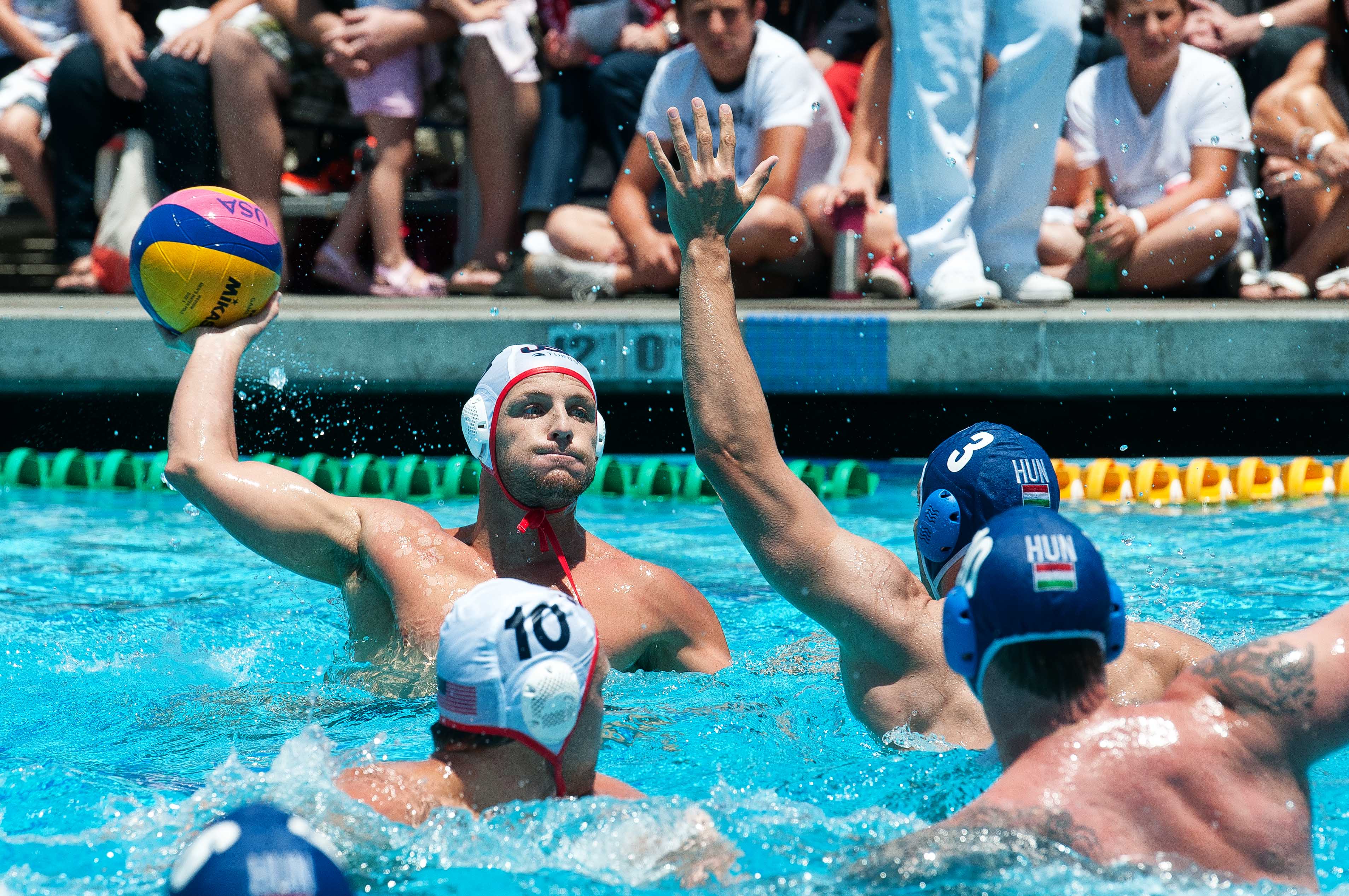 We will focus on shoulder strength, stability and core work. As athletes seek ways to develop speed and power in the pool, these three areas of training can improve your efficiency in upper body movement patterns. Countless movements in water polo require coordination of the upper and lower body, and a prime example of this is shooting. Let's take a look at how to harness the full potential of your shoulders and core.

While legs are the foundation for everything you use in the pool, a stable upper body will maximize the effectiveness of your shooting and passing motion.  Shooting begins with leg drive, but torso rotation and follow-through generate the velocity behind the ball. The Shoulder/Core block stabilizes and strengthens your shoulders while increasing overall core strength.

Here are a few exercises we have included in the pre-workout block for the Water Polo Olympic Development Program.

The resistance band helps strengthen shoulder muscles with this exercise, especially the deltoid muscle.  This helps you generate more power in overhead movements such as swimming and shooting.

Stand facing away from the band, feet hip width apart. Hold band at the side of body, arm extended.

Extend the band directly forward. Raise band until arm is fully extended, parallel to floor. Maintain a flat back, and keep your chest up.

This exercise targets the stabilizer muscles in the scapular area.  Shooting and passing is felt mostly in the arm and shoulder, but both movements rely on your scapula muscles for support.

Lift arms, thumbs towards sky while pinching the shoulder blades.Your head and neck should stay neutral.

The Side Bridge targets the obliques and core to improve the rotational acceleration of the torso in the shooting motion. The velocity of your shot is only as great as your core strength. In order to generate the maximum velocity behind the ball, you need core contraction to successfully transfer force from your lower body to the upper body and into your shooting arm.

Lie on side with legs extended, one foot on top of the other. Place the elbow under the shoulder with your forearm and hand on the ground for support.

Lift hips off floor. Elbow, forearm, hand, and bottom foot are the points of contact with floor. Extend opposite arm.

This exercise’s focus is to engage your core with a crunch motion while flutter kicking. Your hip-flexors will also be engaged from the flutter kicks in addition to the concentric contraction of your abdominal muscles.

Begin lying face up. Arms and legs should be extended, on floor. Cross hands overhead in a streamline position.

Elevate feet 6 inches above the floor and begin flutter kick motion. Lift the shoulder blades off floor in the streamline position.

Actively squeeze abdomen to maintain tightness throughout the core

In a steady, controlled motion, return the shoulder blades and feet to starting position. Repeat for prescribed reps.

The Tempo Pushup is a stabilizing movement focusing on slow contraction of the chest and shoulders towards the ground. The explosive upward movement back to starting position in this pushup variation mimics the quick transition from endurance to power motions common in water polo.

Pushup position, hands under shoulders with a tight core.

In a controlled motion, take 5 seconds to hinge at elbows and lower body towards floor.

At the bottom of the movement, explode to starting position. Movement back up should take 5 seconds.

To sign up for a BridgeAthletic training program, visit our water polo page here.

To learn more about BridgeAthletic, visit our main website here.