4 Exercises to Power Up your Lacrosse Shot | BridgeAthletic 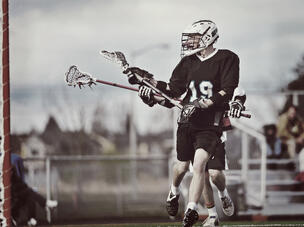 A lacrosse shot demands a full body effort. Like many movements in sport, the shot begins way down in the lower body and ends with the whiplash of the upper extremities. For complex movements like this, force production in the torso and efficient force transfer across the body is critical to creating the peak power necessary for a strong shot. If you’re going to need a lot of force behind your movement, you need to train explosively.
Carl Christensen, strength coach for the Duke Men’s Lacrosse team and a member of the BridgeAthletic Performance Advisory Board, explains that strengthening your entire kinetic chain of muscles is crucial to not only power production but also injury prevention. Any weak link in the kinetic chain can send all the force into the wrong area, compromising technique and exposing the body to acute injury. “Some of our guys who shoot the hardest are very weak in areas you wouldn’t think,” Christensen says.
He starts perfecting biomechanics with the lower body. Emphasizing stability and power in the quads, hamstrings, hips and glutes leads to greater force production and maintenance of that power as it transfers up the chain and into your shot. Christensen prefers single-leg exercises for this purpose, because they increase stability and balance strength in both of your legs so your shot is equally effective from either side.
Core exercises that focus on rotational strength are the critical piece to transferring power from the lower body to the upper body. The posterior kinetic chain, along your backside, is responsible for a large portion of your force production so it is important to also go through strength exercises for your back. The stronger your mid-section, the more control you have over your shot, and the lower the risk of injury for your shoulders and upper extremities.
Importantly, when you train for explosiveness, you perform peak power exercises in smaller components of the whole movement. Christensen does not have his lacrosse players perform exercises that simulate a lacrosse shot. High resistance on a complex, full body movement can lead to technique breakdown and injury. “There’s a saying that the more complex the skill, if you add resistance, you might mess it up,” Christensen says. “We do some things that may resemble a lacrosse shot, but it's not exactly specific to the shot.” Power exercises should always focus on short, fundamental movement patterns.
Build explosiveness into your lacrosse shot by integrating the following exercises into your weight room routine.
1. Lawnmower Pull
Level: Intermediate to advanced
This is a Split-Squat combined with a Single-Arm Cable Row. It targets shot development through single-leg stability. The split stance and unilateral row build strength that's specific to lacrosse movement patterns.


2. Ropes – Figure-8
Level: Advanced
Battle ropes are a great power exercise for your back, shoulders, arms, grip strength, and core. They fully integrate your core with your upper body to produce that familiar power needed at the tail end of your shot. The Figure-8 is great for lacrosse, because it is cross-sectional, not solely linear. Your legs, lower back and core are in an isometric hold, while your upper back, shoulders and arms battle the undulating movement of the ropes.


3. Weight Vest Power Step-Up
Level: Intermediate to Advanced
This variation of the Step-Up uses a weight vest to spread the load across your entire body. Incorporate this explosive version into your program to develop lower-body power and endurance needed to maintain shot velocity and control at the end of a tough game.


4.Band Rotations - Long-Lever
Level: Development to Intermediate
This is a great shot development exercise for athletes of all levels. Younger athletes can incorporate it into the main part of their workouts, while advanced athletes can use it as pre-game or pre-workout activation.


To learn more about the program and get custom lacrosse workouts created by elite experts, go to www.bridgeathletic.com.