Can You Replace Heavy Lifting? | BridgeAthletic 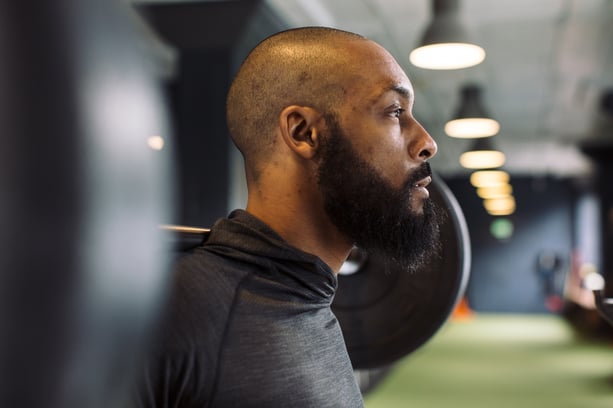 With equipment options limited for many athletes as they train at home, many coaches are looking for ways to get creative with their workouts.

Blood flow restriction training (BFR) has been gaining steam as an alternative means of improving strength and growing muscle mass. BFR training is typically performed by using cuffs around the upper arms and/or legs to restrict circulation of blood, without ever completely cutting off blood flow. Once the cuffs are in place, exercises are performed using relatively low loads--often in the 20-50% of 1RM range.

Yes, this may all sound a bit strange, but it works. How? Restricting oxygen in muscles does a few things: first, it forces the body to recruit Type II (fast-twitch) muscle fibers which normally only get recruited at much higher intensities. This is because Type I fibers require oxygen, and we’re cutting off the oxygen supply with BFR. Second, low oxygen levels also lead to lactic acid production, which leads to protein synthesis. Finally, lactic acid and fast-twitch fiber recruitment normally go hand in hand with muscle breakdown, but due to the low training loads, this is not the case with BFR. Using a recent study, we’ll take a look at how BFR compares to traditional training when training volume is equalized.

28 subjects were split into two groups: low intensity training with BFR (LI-BFR) and high intensity training without BFR (HI-RT). The subjects performed knee extension and elbow flexion exercises 3 times per week for 8 weeks. Careful steps were taken to equate the training volume between the groups; in summary, it was done by measuring the 1RM of all participants and using a series of formulas to calculate the volume of the LI-BFR group based on that of the HI-RT group. The HI-RT group performed 4 sets of 8 reps at 80% of 1RM for each exercise and the LI-BFR group performed 4 sets of between 5 and 6 reps per exercise at 30% of 1RM. Prior to the intervention period, the subjects underwent a number of tests to measure muscle mass, fat mass and endothelial function (via flow-mediated dilation and concentration of NOx). Isometric and isokinetic tests were then performed, along with an acute exercise protocol where blood sampling was done pre and post session.

Overall, both groups responded well to the training. NOx production, which is generally a product of high-intensity exercise, was about the same in both groups. Reps at 60% of 1RM increased materially for both the LI-BFR subjects and the HI-RT subjects after the protocol was complete. Muscle thickness also increased similarly regardless of which training modality was used. The one area in which the HI-RT performed better was in peak torque for isometric elbow flexion and isokinetic knee extension. With that said, the LI-BFR group still showed improvements in these tests, and the other two results (isokinetic elbow flexion and isometric knee extension) were similar between groups.

BFR works. For people who have certain limitations when it comes to training, whether cardiovascular, muscular, metabolic, etc., BFR is a promising alternative that may deliver many of the same benefits as more traditional, higher-intensity training. With that said, this study focuses on isolated movement patterns that aren’t particularly relevant to elite athletes. Is doing curls and leg extensions with cuffs going to mimic explosive jumps and compound lifts when it comes to performance training? No. And therefore BFR training certainly shouldn’t be thought of as anything resembling a replacement for more traditional training in the performance space.

With that caveat in place, there’s still a place for BFR in the world of elite sports. Based on what we know, BFR may very well be effective in both rehabilitation and as a means to get in extra work when the body may be too fatigued to productively train at higher intensities. Because so little muscle damage occurs with BFR, BFR training can certainly be used to supplement regular training, and athletes will still reap the benefits of protein synthesis and Type II muscle growth