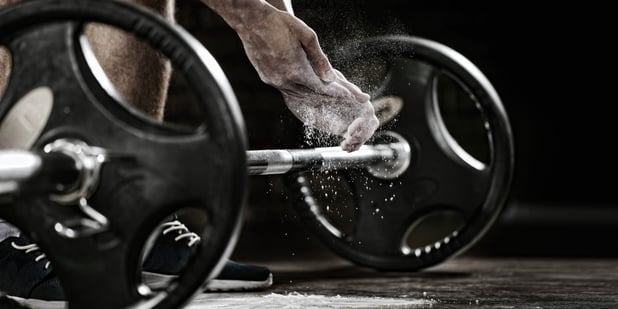 Elite athletes incorporate Olympic lifts and lift variations such as power cleans, hang cleans, and power snatches into their strength training because these exercises boost athletic performance. This style of lifting offers many benefits for a variety of athletic endeavors—ranging from tackles in football to dives in swimming. When executed correctly, Olympic-style lifting is an opportunity for athletes to increase strength, speed, and power. Learn how Olympic lifts can maximize training programs and athletic performance.

In all standing sports, force is generated from the floor and is transferred to the lower limbs and up the kinetic chain. Standing while performing dynamic movements require spine stabilization and the production or absorption of force. Olympic-style lifts not only build power in the same direction as the movement that many sports require, but they also improve athlete proprioception and spatial awareness. Both of these are crucial for stability, body awareness, and injury prevention.

Compound exercises are multi-joint movements that involve several muscles or muscle groups in one exercise. Olympic lifts and their variations involve the entire kinetic chain as each exercise demands a variety of actions. For example, a power clean develops leg, hip, back, and shoulder strength on the way up, the ability to absorb load on the catch phase, and core strength and stability throughout the exercise. In a study comparing back squat versus a power clean on performance, results revealed that a power clean, the more complex movement, led to greater improvement in sprint time, velocity, and average acceleration in 20m running sprints in elite rugby players. Olympic lift exercises involve several muscle groups, so it is important to progress from basic variations to more complex movements in a systematic fashion so athletes can learn proper technique at each level of lifting. For example, it would be wise to be able to execute a proper back squat, a more basic exercise, before athletes perform more challenging lifts. At the end of the day, technique matters more than how much weight athletes can lift.

In athletics, the more a training program replicates sport performance, the better prepared an athlete will be. Olympic lifts use the same natural movements as running, jumping, diving, tackling, and throwing. The main movement pattern Olympic lifts replicate is called triple extension. This occurs when the ankle, knee, and hip all extend simultaneously during lower limb movements like running and jumping. These lifts also replicate the torso strength an athlete's body uses to stabilize itself when it receives a load, primarily during the catch phase of a lift.

In order to successfully complete a power clean, hang clean, power snatch or similar lift, athletes need quick neuromuscular recruitment to coordinate the sequence of movements. The faster athletes can contract several motor groups at once, the greater their speed will be. Olympic-style lifts develop speed in athletes because they are executed with explosiveness. The quicker athletes train their muscles, the faster they can contract them during competition.

Improved Posture and Range of Motion

When an athlete has poor posture, their force transfer becomes inefficient. The kinetic chain is in a sub-optimal position where muscles do not fire correctly and the risk of injury becomes much greater. Likewise, an athlete with a limited range of motion cannot reach the positions that will maximize their power and speed. Olympic lifts improve both range of motion and posture. All the “postural muscles” which support the spine and pelvis are strengthened in these lifts, and the range of motion in the hips is particularly improved.

Olympic lifts and their variations are a key element of elite strength training that should be performed once an athlete has progressed through a series of basic lifts with proper technique. These lifts closely replicate the demand on an athlete's body during competition. In addition, better posture and range of motion helps athletes stay injury-free and obtain greater power. Ultimately, Olympic lifts can maximize training programs and athletic performance. To learn more about ways to enhance athletic performance check out these blogs on stretching and naps.