Lacrosse: Power in the Offensive Box 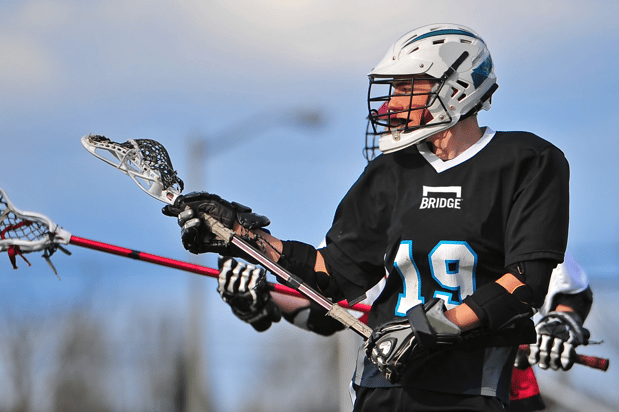 5 Exercises To Help You Dominate At Attack

Defense wins championships, but no team has ever won without scoring any points.

Offense adds the spark and gives the defense a score to defend. Carl Christensen, strength coach for the Duke Men’s Lacrosse team and Performance Expert for BridgeLacrosse, highlights 5 exercises that can help you improve your foot speed and agility, while keeping your hands and stick razor sharp on attack.

Speed and agility is not developed on it’s own; it needs to be worked on in conjunction with stability and strength. These exercises include both agility drills and strength and stability exercises for you to get the most up front. Work on lateral speed, not just linear or straight-forward speed and develop the ability to dodge and re-dodge defenders at high speed.

Coach Christensen's note: Attackmen need to be strong and stable enough to withstand the punishment given out by the defenders; they need to be quick enough to turn the corner; and they need great hands when in tight space. These are all attributes that can be trained both on and off the field.

Coach’s Tip: Quick hands are imperative for handling close to the goal. This drill helps to improve reaction time and develop quick hands. The goal is to catch both tennis balls before they hit the ground. Focus on not anticipating the drop of the tennis balls, but reacting to the drop. Take your time between reps. Don’t rush. Reset between reps.

Coach’s Tip: Ladder drills are a great tool for lacrosse players to use to excite the nervous system before a workout or game. This exercise focuses on coordination and rhythm. Focus on the flow and rhythm of the movement as you move through the ladder, instead of trying to rush through the ladder. This is great for both pre-workout and pre-game activation. Be light on your feet.

Coach’s Tip: Lateral movement in tight spaces close to the goal is an imperative skill for attackmen to train. Keep your chest up as move you through the hurdles. Drive your arms and work on being light on your feet with each step. As you improve, avoid looking down at where you want to place your feet and focus on being fluid as you move laterally over the hurdles. For the Advanced group, add your Lax stick to the drill. This takes your arms out of the movement, making you rely more on your mid-section and lower-body drive.

Coach’s Tip: Coach Christensen likes to use this exercise as one of his core lower-body building blocks for lacrosse development and athleticism. This exercise develops single-leg stability and balance, which translates into improved agility and the ability to accelerate, decelerate, and cut laterally at speed in short space.

Coach’s Tip: The lawn mower pull is a great exercise for attackmen to utilize in training to turn the corner on the field. Quick hands and reflexes are important traits to have as an attackman, but shoulder and upper back strength and stability are needed to keep your head up and take the punishment the defenders are giving out. This exercise helps you build unilateral lower-extremity stability and upper-body unilateral strength.

Enjoy these 5 exercises and dominate your opposition up front.

Carl Christensen has been the men’s lacrosse sports performance coach at Duke University since the 2009 season. During his time with Duke Lacrosse, he has worked with three National Championship teams, six Final Four teams, 23 players who earned a total of 38 All American awards, and 23 Major League Lacrosse Draft picks including two players selected as the top overall pick in the draft.