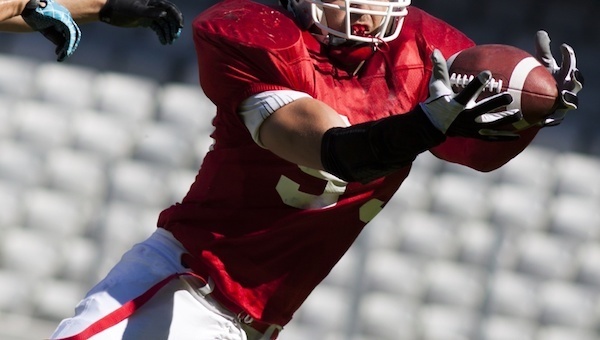 Football preseason is just around the corner. It’s time for players to start getting into the right mindset to get ready for the first kick off in September. Preparing for preseason marks the start of football season and is a time for players to work through new plays with new teammates and give it their all on the field. It is the first chance an athlete has to make a good impression and will set the bar for the rest of the season.

Prepare to Be Prepared

Preseason is the time to put in work, and players need to be prepared before they arrive at preseason camp. It is essential to build up strength and conditioning throughout the summer, as well as allow time to taper and recover. This ensures that players are preparing their bodies for both preseason and the regular season, while reducing the risk of injury. While preseason is typically utilized for conditioning, this time should also be used to try different plays and test new skills. It’s important for players to be well-conditioned at the beginning of preseason and use preseason to work out the kinks, build a strong team bond, and try new things.

Athletes should look at preseason as the beginning of the real season, and as an opportunity to start the season off on a good note. The habits that are set in place over the summer develop a good platform for players to build on and continue as they start school. Everything that athletes are doing to prepare for preseason training will help them during the season. It’s also good to remember that preseason isn’t a sprint, it’s a marathon, and players should progress over the summer to ensure maximal performance.

A good way for athletes to mentally prepare for preseason training is to think about the goals they want to accomplish in the upcoming year. Players should think about their biggest strengths and weaknesses in order to determine specific goals and a plan for long-term improvement. Having a plan before preseason training is helpful for players because it allows them to map out how they’re going to approach the actual season. It also allows them to start taking the required steps and work towards their goals before the season begins. Ultimately, mapping out goals before preseason will help guide players through a progression leading into season.

During the summer, it is easy for athletes to let good nutritional and sleep habits slip. It is important that players start getting into a routine before preseason starts so that their bodies are prepared and already adjusted to the change. Proper nutrition is valuable in helping an athlete’s body fuel their muscles in order to make it through a full day of training. On the back end, quality nutrition and sleep are important for recovery too. In order to be ready for another hard day of training, the body needs to repair any muscle damage and to be able to sustain muscle growth. To learn more about good nutritional habits, players should read this article. Athletes should implement these habits during the summer to help them train as they prepare for preseason.

Any player that wants to take their game to the next level can start by going into preseason strong and implementing healthy lifestyle choices to support their physical and mental game. Athletes that come into preseason conditioned and ready to go will earn the respect from their coaches and teammates, and will have a more successful season. Check out this article to learn more about how to enhance athletic performance.