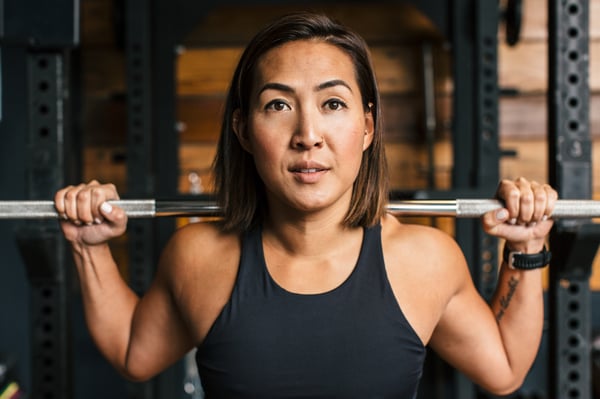 Our Performance Director, Rob Hartman, recently shared a new research article posted on the Journal of Strength and Conditioning Research called, Changes in Bench Press Velocity and Power After 8 Weeks of High-Load Cluster- or Traditional-Set Structure. The results of this study suggest that how a coach structures sets has less value than the intent in which you execute them. These findings strengthen the support of coaching “concentric acceleration” in power focused programming. With this in mind, we thought it would be interesting to revisit a previous study we shared on Velocity-Based Training (VBT).

Autoregulatory training programs have been gaining popularity among strength and conditioning experts and trained populations. However, subjective reporting and fatigue before working sets indicate that there may be a better way to regulate loading over the course of a workout. A study on Velocity-Based Training (VBT) shows that utilizing Mean Concentric Velocity (MCV) on a set-by-set basis can reduce overall training volume while achieving similar--or in some cases better--results when compared to traditional Percentage-based Training (PBT).

Both groups followed the same 6-week program in terms of exercise selection and initial loading prescriptions. The mesocycle included 2, 3-week waves, with the first 3-week cycle progressing from intensities of 70% up to 88% and the second wave topping out at 95% of 1RM.

The control group (PBT) followed these percentages based on results gathered in the initial testing session. The intervention group (VBT) used velocity zones and velocity stops to modify weight and reps. To give a bit more color, velocity zones equate bar speed on each lift with percentages--for example, the bar should move at 0.74-0.88 m/s for a Back Squat performed at 70% of 1RM or 0.58-0.69 for a Bench Press at the same intensity. Velocity stops at 20% below target velocity were integrated into each set. This allowed for both weight and reps to be adjusted up or down if subjects were above or below velocity zones.

Both groups got significantly stronger in the Back Squat (+9% VBT, +8% PBT) and the Overhead Press (+6% in both groups). However, only the VBT group got stronger in the Deadlift (+6%) and improved materially in the Counter-movement Jump (+5% VBT v. +1% PBT), and the gains in the Bench Press were double for the VBT group compared to the PBT group (+8% v. +4%). Due to the velocity stops, the training volume of the VBT group was also 6% lower than that of the PBT group.

More studies to validate the findings here. Can other studies confirm these initial findings, and if so, how does the length of the training program impact the results? For instance, over 12 weeks, can VBT lead to even greater gains with incrementally less volume? Is there a point at which PBT gains catch up with those achieved on a VBT program?

Focusing on intent or "concentric acceleration" combined with the monitoring value of VBT appears to be a surefire way to get the best bang for buck results.