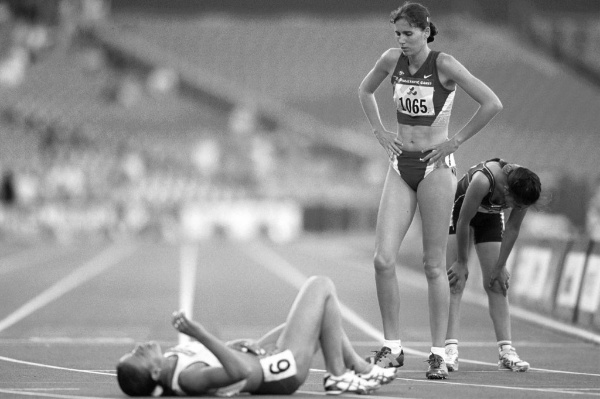 Okay, so you’ve fully acclimated yourself to the heat and mastered your hydration plan. You’re almost ready to take on the blisteringly hot, swelteringly humid conditions of competition. A discussion on heat training would not be complete without addressing cooling methods and early identification of exertional heat-related illness.

It may sound contradictory to state that an athlete should cool down during a warm-up, but some studies have shown that “pre-cooling” can reduce cardiovascular strain and improve both endurance and high-intensity, repeated sprint exercise performance in hot conditions.1-4 Other studies have shown less of a benefit in the shorter sprint distances and even a decrease in performance.5-6 For example, cooling the legs through cold water immersion prior to exercise can decrease nerve conduction and the speed of muscle contraction which would lead to decreased performance during sprints.7 As an alternative, the use of cooling garments which selectively cool the torso may decrease the core temperature and thus reduce cardiovascular strain without impairing leg performance, allowing a runner to maintain high performance.8

The ingestion of cold fluids or ice slurry beverages is a topic of debate, especially during exercise, with the main argument being that sweat rate is reduced leading to less skin surface evaporation.9 More recent studies have shown that ingestion of ice slurry beverages before or during endurance or intermittent-sprint exercise led to improved performance.10-13 One accepted theory is that the ingestion of ice slurry beverages delayed the time to reach a critically high, performance-impairing core temperature and also led to an increased ability for the body to store heat (i.e., a larger “heat sink”). This cooling method was found to have greater benefit over cold water ingestion because of the combined solid and liquid form as well as the energy attained from the “phase change” from solid to liquid.10 If the resources are available, it’s best to take a combined approach of ingesting ice slurry beverages, wearing cooling vests (if vests are not too heavy), and the use of a fanning system.14 Similar to hydration, cooling methods should be tested and individualized during training to minimize unwanted outcomes in performance during competition.

In warm summer conditions as athletes push their limits, the dangers of overheating are high, even for elite athletes. To properly conclude this discussion on heat training, I want to address the importance of early recognition of exertional heat related illness (EHRI). EHRI is a spectrum of heat illnesses that can occur during exercise in conditions of heat stress with high temperatures and sometimes high humidity levels.15 If potential for high environmental heat stress (high temperature and humidity, windless air, and extreme solar radiation) exists, athletes, coaches, and athletic trainers should be aware of internal and external risk factors for EHRI (Table 1) as well as early recognition and preventative strategies.

EHRI usually starts with a heat rash or “prickly heat” (itchy rash over clothed areas) and heat edema (puffiness in gravity-dependent regions like the ankles).15 This can progress to exercise-associated collapse, which usually occurs after exercise has stopped when the leg muscles stop acting as a pump to bring blood back to the heart. If an athlete is prone to exercise-associated collapse, he or she may benefit from wearing compression sleeves or socks during training and especially on days of competition.16

Other indicators of EHRI include exercise-associated muscle cramps, which can be the result of excessive sweat losses or heavily worked muscles leading to over-excited nerves. Further discussion on management of EAMC can be found here.

Heat exhaustion is the most common form of EHRI and is seen in athletes who reach a dehydrated state leading to a drop in blood pressure. The most serious form of EHRI, exertional heat stroke, is one of the top causes for sudden death in athletes on-field, with American football, in which pre-season training spans the hottest summer months, having the greatest number of fatalities. Heat exhaustion and exertional heat stroke are compared in Table 2. Athletes who exhibit signs and symptoms of exertional heatstroke should be immediately removed from competition and taken to the nearest medical facility for rapid management. Exertional heat stroke is preventable when athletes do proper heat training leading up to competition, are mindful of environmental heat stresses, and recognize early signs and symptoms. 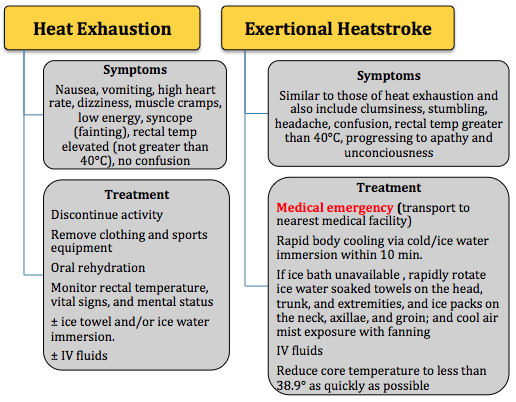 Reaching an optimal performance state in challenging, hot, humid conditions is attainable if an athlete prepares properly, which includes factoring in time for adequate heat acclimatization, taking into consideration the specific variables that may be experienced during competition. Equally important is a sound hydration strategy, which is ideally practiced throughout training. Finally, understanding the role of re-cooling and recognizing early signs of exertional heat-related illness are some final key pieces in successful heat training. Executing the strategies detailed in this 3-part series will set you up for success in your next heated competition.